Why You Should Consider this OutSystems Mobile App Update Strategy 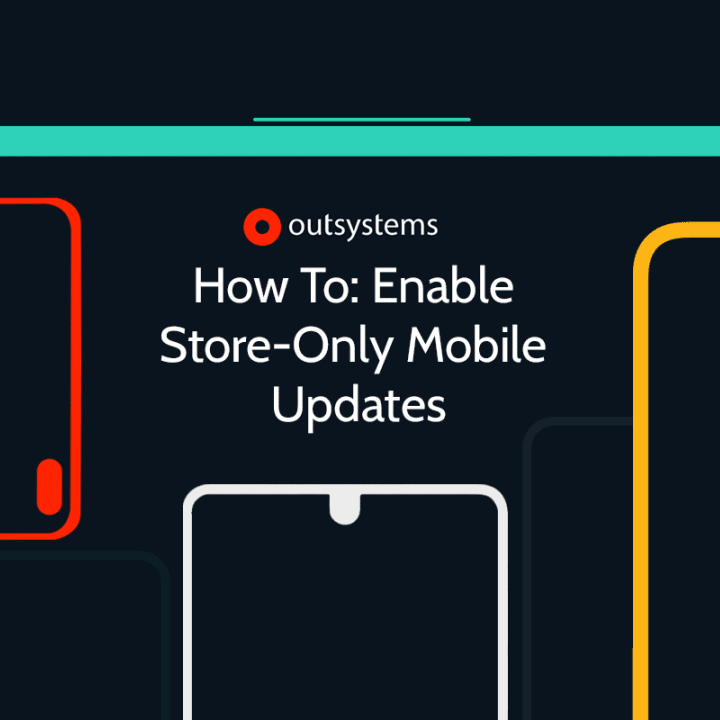 So you’ve been working on your OutSystems mobile app for months, and you’re ready to go live, awesome! I have a question for you: After going live, what update distribution strategy are you going to go with?

What is mobile application update distribution?

Let’s start with a quick definition: Application update distribution is the process of releasing app updates to a set of users to continuously promote app engagement and usage. This process is typically the final step in a mobile app deployment workflow and consists of planning the ‘how’ and ‘when’ when it comes to getting your app into the hands of your users.

Today, there are various distribution channels to which you can submit your app, ranging from publicly accessible app stores to enterprise mobility management solutions. Your target audience should heavily influence the channel you select to guarantee that your app is reaching its intended users. For instance, a mobile app intended to be used by internal company employees might not be best suited in a public app store like the Google Play Store or Apple App Store, but rather distributed via an internal enterprise store. Similarly, a mobile app targeted at customers would have a higher adoption rate if distributed securely via the public app stores rather than being sideloaded.

Furthermore, there are 2 other key factors to consider in your update distribution strategy: The expected frequency and the type of updates.

The frequency of updates refers to the expected time between every update pushed to your end users. Consider an example where you’re releasing a mission-critical application and need to have the ability to roll out updates in the shortest time frame possible to minimise unexpected production issues. In this scenario, using the public app stores as your distribution channel might not be preferable since app store review times for each new update can be too significant for the business to accept.

The other factor is the type of update. Typically, there are two common ways of pushing updates to your customers:

So, how are those concepts applied in OutSystems mobile apps I hear you ask. Let’s start with Hybrid updates.

The benefits of Hybrid updates 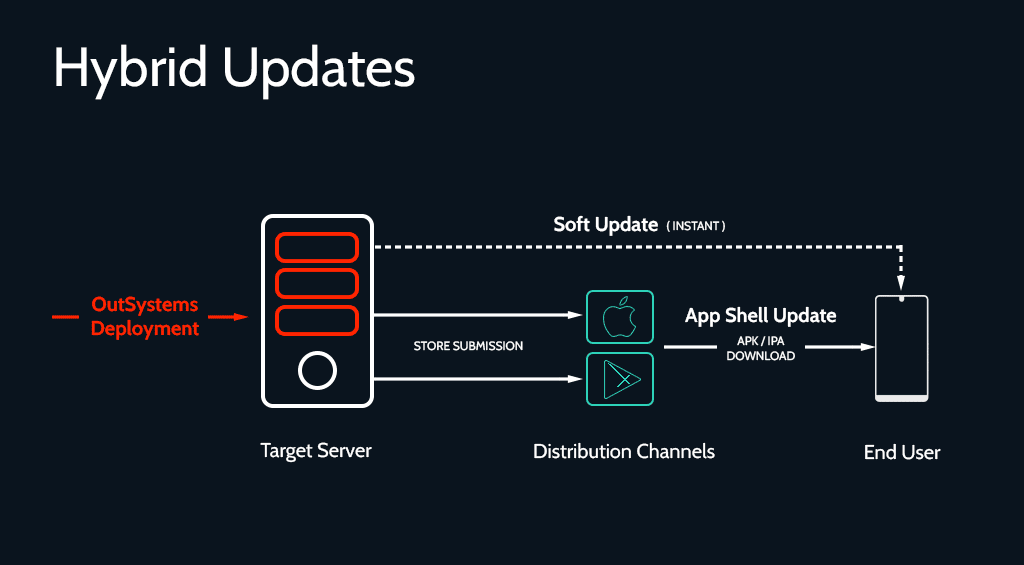 All OutSystems mobile applications are set up to receive hybrid updates by default. Understandably, this is the favoured configuration for the majority of applications, and there are multiple reasons for this:

The problem with Hybrid updates

Considering the benefits above and the fact that OutSystems recommends using Hybrid updates, you might ask, “Why would I ever want to think about configuring my app’s updates in any other way?”. Well, there are multiple scenarios where soft updates might not be preferable.

Firstly, there isn’t a straightforward method to disable soft updates for a particular deployment where your app relies on a new feature that also requires a store update. This lack of control could introduce instability risks if users use the app with the soft update before installing the store update. This limitation is further magnified by the fact that public store submissions could take a couple of days to complete the review process, let alone the time needed for the users to download the update which increases the risk window significantly. Now, of course, there are strategies to minimise this (like properly handling new Cordova plugins or disabling parts of the app which need the store update); however, this usually comes at the cost of user experience.

Secondly, consider this scenario: You’re working on a mobile application that will be used in a completely offline environment. Your mobile application will not receive soft updates even if configured to do so due to its offline state. However, more importantly, due to the app remaining in an offline state for an extended period of time, it will most likely miss many soft updates. If the app then goes online and fetches the latest soft update, the introduced changes might attempt to modify app parts that don’t even exist in the app (that might have been added in a previous missed soft update). This puts the app and its local data at massive risk of corruption or data loss, and due to the environment’s offline state data backups would been a challenge.

With those 2 scenarios in mind, it’s clear that a Store-only update approach is much more suitable in those cases. This is where OutSystems’ overlooked Configure Mobile application updates distribution feature comes into play. Found under Technical Preview at the time of writing, this feature enables Store-only updates for your OutSystems mobile apps on a per-app basis (Keep an eye out for follow-up article reviewing this feature in detail). Now, lets talk about what you can gain from this switch.

The benefits of Store-only updates 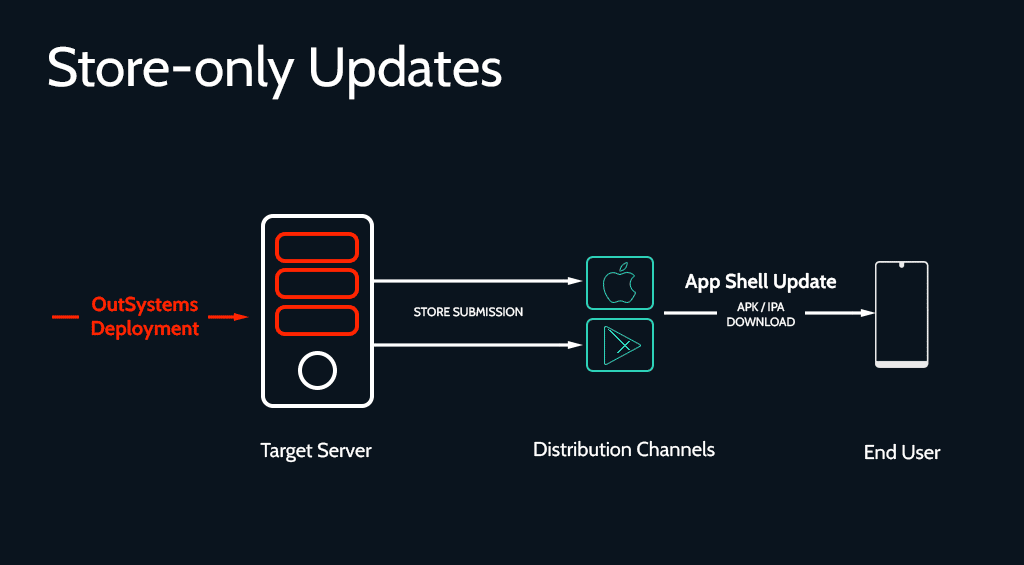 Some of the immediate benefits gained from switching to this approach include:

The problem with Store-only updates

Despite the advantages listed above, there are a few downsides to this approach you need to be aware of:

Implementing a robust mobile application distribution strategy is vital to achieving the successful delivery of your mobile apps. Furthermore, continuously reviewing and optimising the performance of your update distribution channels will enable you to adapt to technological evolution whilst continuing to satisfy the needs of your customers and achieve long term success.

Not all apps are built the same nor have the same requirements, so knowing that you can consider a Store-only update distribution feature for your OutSystems applications could be all that you need after a successful launch. 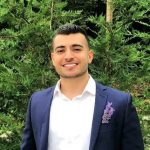 This article was originally published on LinkedIn. 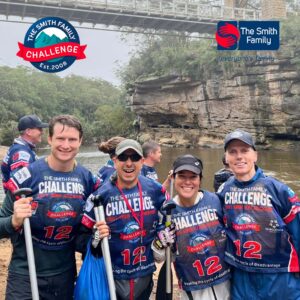 As our dream team crossed the finish line in 4th place where they were awarded laminated paper medals coloured in by children who are part of the wider The Smith Family. Our team was very proud of how they worked together, bonded out in the field and crossed the line as a unit. Well done! 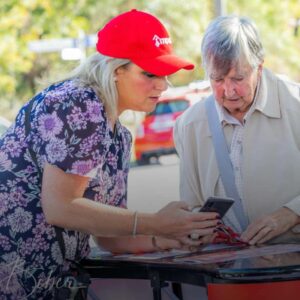 Silence is never the answer: PhoenixDX people answering the call to help

In November 2021, Kathy Kaplan from Impact for women spoke to our team about the impact of domestic and family violence. This is how our team responded to her need for help. 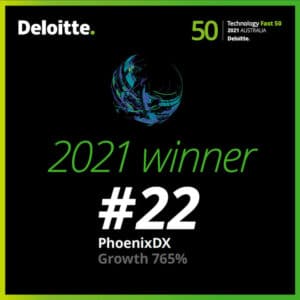 Deloitte’s Technology Fast 50 Australia program recognises and profiles fast-growing technology companies. PhoenixDX is honoured to be listed at #22 in Tech Fast 50 2021. It is a fantastic recognition of our dedicated team’s hard work to deliver innovative, cutting-edge digital solutions for our customers.

We partner with our customers to bring their ideas to life in record time – our work speaks for itself. Here’s a few examples of customer outcomes.

Sign up for upcoming courses and the latest news from the Tech Community, PhoenixDX and OutSystems.

Book a quick call now to talk to us.